Neuroplasticity – How to Help Your Child Develop a Growth Mindset

Parents and educators need to help the young people in their care develop a growth mindset from an early age. This mindset will have a significant impact on their wellbeing and self-actualisation, not just immediately but also throughout their lives, an education expert says.

“South African schools do not generally pay attention to the phenomenon of neuroplasticity and its influence on the development of children and adolescents,” says Colin Northmore, Principal of Evolve Online School, a brand of ADvTECH, Africa’s largest private education provider.

He explains that during early childhood, the infant’s brain undergoes an explosion of development. Each new experience and interaction creates new neural pathways that form the foundation for how a child can solve problems and interact with the world around them. This neural pathway formation is a process known as neuroplasticity and ultimately impacts a person’s ability to change how they think and realise their potential.

“There is a growing body of evidence showing that children go through two phases of neuron growth and culling, so, apart from early childhood, plasticity also increases during adolescence. Therefore, one of the most critical themes in the literature relates to how external stimuli or daily experiences in adolescence play a crucial role in the future quality of a teenager’s life,” says Northmore.

“The influence of stress and trauma, lack of sleep and risk-taking behaviours typical in this phase of a child’s life, therefore, has a tremendous impact and the potential to damage brain development. Additionally, the impact of addictive substances such as alcohol, nicotine and narcotics is much more habit-forming and destructive at this stage of life than in later years.”

On the other hand, positive strategies such as meditation, a healthy diet, sufficient sleep and exercise have a significant impact on brain development, he says.

Northmore says most South African children are consistently faced with high-stakes exams conducted in uncomfortable classrooms with limited time or opportunity to redo tasks or improve their marks, which causes trauma and stress and inhibits positive brain growth.

“The best strategies teach children how to control their emotions and their flight/fight/freeze response. Teachers and parents have a duty to shift their understanding of, and excessive focus on, the value of marks, and instead start teaching the belief that a child can learn almost anything under the right circumstances,” he says.

“Maximising the benefit of plasticity in early childhood appears to require the same techniques as in adolescence. Parents and teachers can help children develop plasticity by teaching mindfulness and breathing exercises, self-regulation and development of social-emotional insight by including such content in the curriculum and at home.”

Northmore says Evolve Online School uses a specific model for understanding how children learn based on the belief in a growth mindset and the power of neuroplasticity.

“So we follow a mastery-based approach that allows students to have multiple opportunities to master and improve their understanding of what they should know and be able to do. Children who often fail and learn from their mistakes build resilience and perseverance, and develop a can-do attitude rather than a belief that their ability is pre-ordained and set for life.”

He says there are a few ways in which parents and teachers can immediately help young people start on the path towards developing a growth mindset, including:

Summer bodies are made in winter (at home)

22 Emmy nominees, with 118 nominations, to stream on Showmax 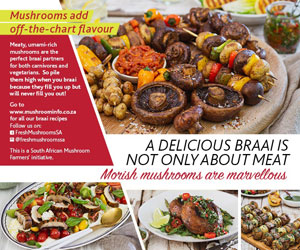 Summer bodies are made in winter (at home)

Five ways saving is as simple as.. Finding a dragon